Hello there! Welcome to our weekly edition of top tweets – a useful compilation of health tips, quotes and thoughts, that others have felt the most affected by. Last week shone a spotlight on children with Down Syndrome – a combination of inspiring entrepreneurial ventures, and the importance of fact based journalism. We also learn just how important service dogs are, examine signs of mental issues, the public struggles of visible skin disorders, and the extra ordeals of being chronically ill.

I hope you find these posts useful and interesting. Should you have suggestions or topics you would like to see discussed more, feel free to let me know in the comments below! Have a great week ahead!

To Those Who Are Quick to Judge People w #Psoriasis – find out more: https://t.co/eYNapF7HvH #autoimmuneDisorder pic.twitter.com/iwpRcJrhuM

To the @CNN Writer Who Referred to #DownSyndrome as a #Disease – factual #reporting is impt: https://t.co/unCgLtipsX pic.twitter.com/B7Y4UKOiZf

What You Don’t Realize Abt My #Habit of Oversleeping – what is '#healthy'? https://t.co/IkrWjZ97rG (by @storregi) pic.twitter.com/ssi1nxkHT1

A great question posed by my psych today – 'What can I change to make it better?' There is… https://t.co/rCBxzc0lSb pic.twitter.com/F6XhBXJEBg

15 Common Signs of #Unresolved #Trauma – There is help out there: https://t.co/Mkx1b0uLgo (via @HealthyPlace) #PTSD pic.twitter.com/WlHW2Tqva3

Simple #Symptoms Might Not be so Straightforward for #ChronicIllness People: https://t.co/Q3y94JWsvn #healthcare pic.twitter.com/vV2TtXJdEX

Issue #100: The Need to Normalise Disabilities in Young People & Did You Know That Others Might be Allergic to Your Perfume? 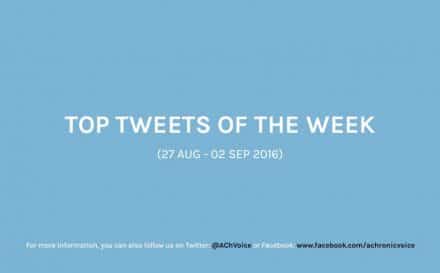 Issue #147: A Hundred Relatable Things if You Live with Chronic Illness & There You are Living, Despite it All

Issue #173: To Thrive is to Move Forward with Purpose & Accepting the Life You Never Planned for with Chronic Illness