Top tweets curated for you, by you, from our Twitter feed this week: The close friendships developed through the thin in life, tips on coping with both pain and recovery, knowledge on the 2nd most common musculoskeletal condition in the world (fibromyalgia), why it’s good to get your kids dirty, a powerful list shaking up ableist beliefs, a funny love story on lactose intolerance, and a must watch documentary on a forger who helped children flee the Nazis (okay not about health, but at the heart of it all we’re focussed on the same issue – humanity).

I hope you enjoy reading and learning from them as much as I did, and have a happy week ahead!

How To Help Alter The #Depression #ChronicPain Cycle – reminders that I needed today, thank you: https://t.co/utDiWpUzgV (by @ALifeWellRed) pic.twitter.com/TnWRyEilvT

[Archives] A #DayInTheLife of a Chronic Illness Person – when #relaxing plans lead to #pain: https://t.co/V4oeuAbk25 pic.twitter.com/9Iv6sNCQcP

How Dismissing #Bullying as '#Kids Will Be Kids' Hurts Children w #Autism – adults need to step in: https://t.co/vq0Pes0lHY (by @kerrymagro) pic.twitter.com/DRXfAKqQqD

The Tragic Impact #Lactose Intolerance Has On My #Love Life – things that you might not even consider! https://t.co/bbPhXL4mEK (via @dose) pic.twitter.com/BAOUW4LEId

If you only have 15 minutes to spare today, this documentary is worth it…every sentence strikes home. https://t.co/abQgfQg4JW

3 Reasons #Moms May Not Ask for #Help When They Need It – judgmental #society: https://t.co/5yLNygjwlK (by @keligoochwriter) pic.twitter.com/lrdegUt2bu

Get Your #Children Good and Dirty – essential for a #healthy #immune system: https://t.co/r1vYQxNEpi (via @WSJ) pic.twitter.com/9UZxgcNytf

“I #Hurt With Her,” She Said & I Took Note – deep #empathy where we've all got 'our backs': https://t.co/KUgtTJCXQv (by @handsfreemama) pic.twitter.com/oYZEhLqoWj

Issue #286: Marketing Ads for Mobility Aids are Still Perpetuating the Stigma That They’re Only Meant for Old People & When You No Longer Remember What It Feels Like to be Pain-Free

Issue #92: Learning to Become Your Own Advocate & the Best Kind of Support Group for Some 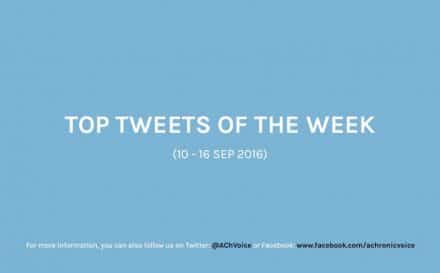