With 10 million copies sold, Viktor Frankl’s “Man’s Search for Meaning” is one of the most popular books of our times. He wrote it in only nine days, but it is full of thought provoking questions and wisdom. His thoughts on this timeless question – ‘what is the meaning of life?’ – are easy to understand, and written with bosom knowledge. People enslaved during the days of Hitler must have struggled with this question a lot. I only wish that I could have read it in the original German version, with all nuances retained.

I am sure that there are many great reviews of this book out there already. But the angle that I’d like to take here is from the perspective of a person with chronic illness. I would exclaim ever so often while reading, “yes! This is exactly what it feels like to be sick, too!” Even the psychological methods that the prisoners used to cope are similar to how we manage our illnesses. After all, to be ill is to be a prisoner within your own body.

I have decided to split the 16 points I have to make into three parts, as it can get pretty heavy on a digital screen. Let’s get started with the first five!

1. The Importance of Self-Respect

Through Viktor Frankl’s observation, the men who possessed a rich inner life often outlasted those who were tough in physical capacity only. The last of one’s liberties is your choice of attitude towards the situations life presents to you.

Living with chronic illnesses over the years has made me realise how important self-respect is. I believe that dignity, more so than love, is the virtue that keeps you alive. When you’ve hit rock bottom, the number of people who love you, or how much they love you, no longer matters. You think to yourself, “they’ll be better off without me”, or “why should they have to suffer for my problems?”. But if you can maintain a thread of dignity, you will have the strength to carry on.

To remain dignified is to remain responsible. Not only towards others, but also yourself. To choose to carry on living, is to choose the right answer. You begin to die when you lose faith in the future. Many of the men who passed away in the camps did so of ‘health reasons’. Yet it was clear to those around them that these men had given up on hope just before their passing. This leads me to wonder, do many of those who die from chronic illnesses actually die from despair above all? 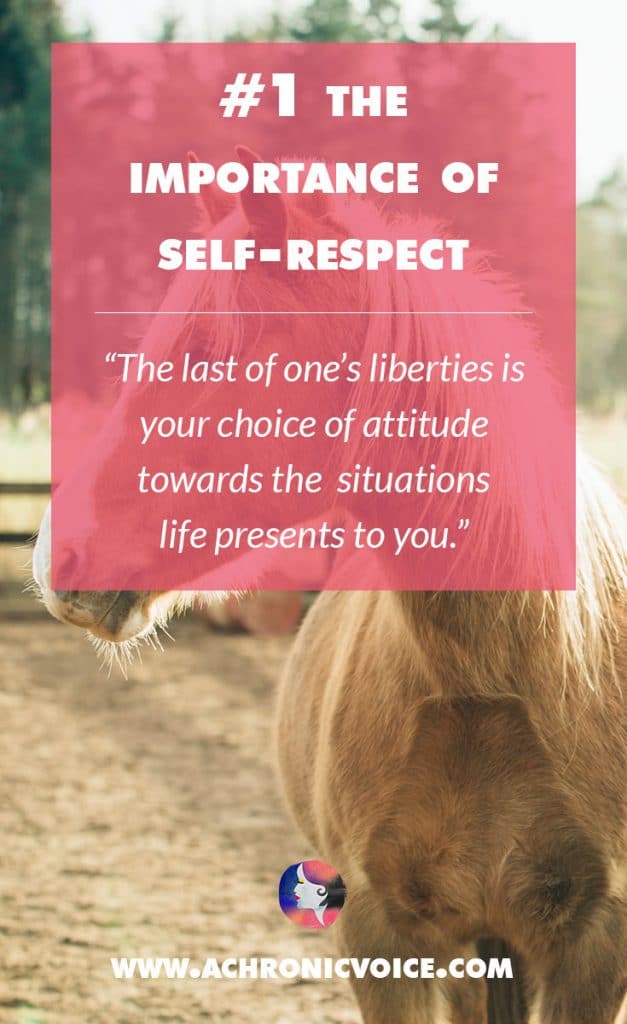 2. The Most Depressing Influence: The Unknown

The most depressing influence in the concentration camps was not knowing how long they’d have to suffer for. As a person with chronic illness, we do have an answer to that – we will have to live with this until the day we die.

But the pain levels and severity of side effects do fluctuate on a daily basis, and can be hard to predict. Kidney stones and giving birth are some of the most painful experiences in life, I hear. Yet the knowledge that this will pass might grant you some strength and comfort to pull through.

When pain is of a chaotic nature, there is no such thing as ‘it will get better with time’. You simply put up with it. This is exhausting; there is no real victory in overcoming a flare up, only a moment of temporary relief. You live to fight more meaningless battles another day. 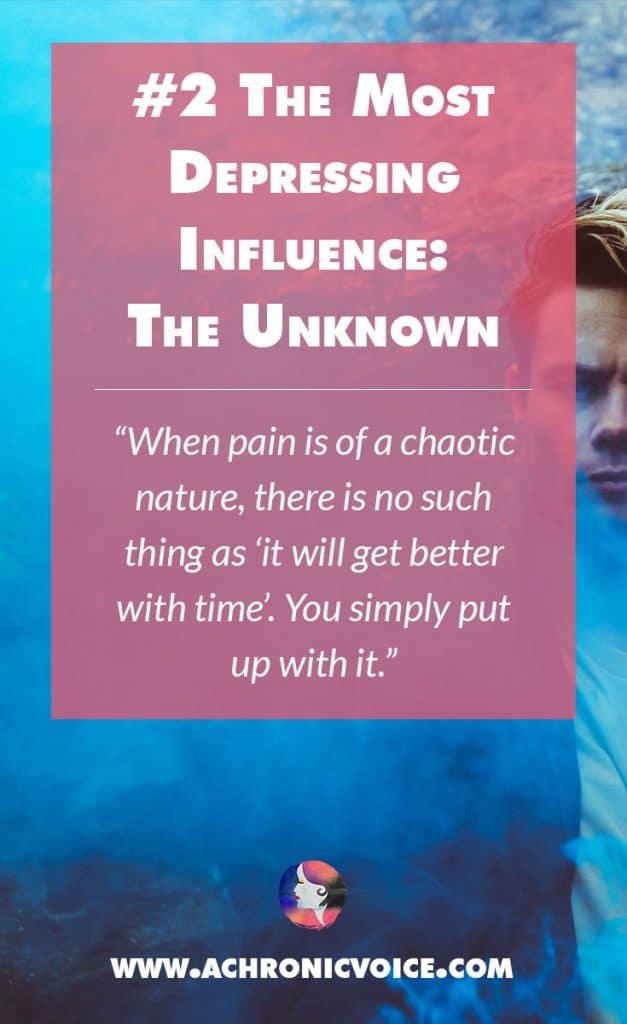 3. Looking at Others, from the Inside Out

The men who laboured within the camps were able to look at life on the outside through the fences, yet this meant nothing to them. It was akin to a dead man peering into a foreign world, and I have often felt this way myself.

I feel trapped in my own body at times, that I’m just ‘looking outside’ of myself wherever I go. An observer of life, rarely a participator. The freedom others have is exclusive to them. They can come and go as they please, fuelled by an unbelievable amount of energy. This vitality is magical to me, something I can only admire but never grasp. The danger with this division lies in the opportunities that we miss, Frankl warns. There is always the possibility of creating something positive out of the terrible, but we must look for it. 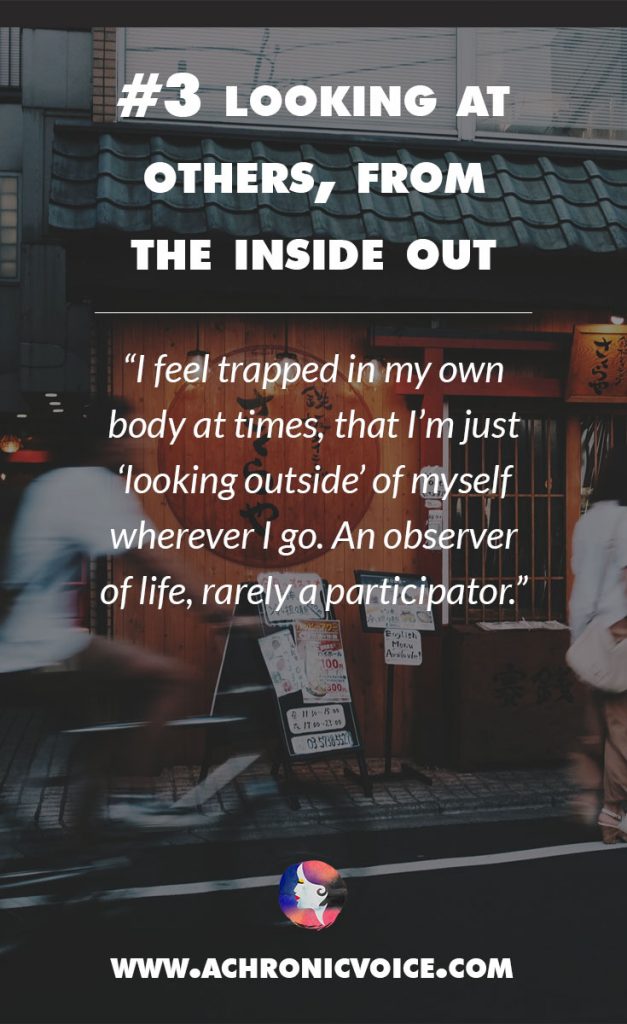 4. Looking at Yourself, from the Outside In

Then there is looking at yourself from the outside in, instead. Frankl would sometimes transport himself into the future via imagination. He would picture himself giving lectures on the current torments he was experiencing. Thus, everything became experimental and scientific to him, interesting even.

Sometimes I also picture myself ‘outside’ of my body, where I separate pain from thought. Not in a transcendental attempt, but more from an analytical, third person point of view.

Even doctors often have no explanation for what’s happening to me, or what to do about it. Our bodies are such fascinating things, including the ‘why’ and ‘how’ of pain. The pain doesn’t disappear when I look at myself as a third party. It is more of putting it under a microscope, which gives me something to observe, study and think about. I am no longer the subject or victim, but the scientist running the investigation. Pain becomes a little more bearable this way. Pain then, has some sort of purpose. Perhaps even more so, because I am experiencing it first hand, ‘for real’. 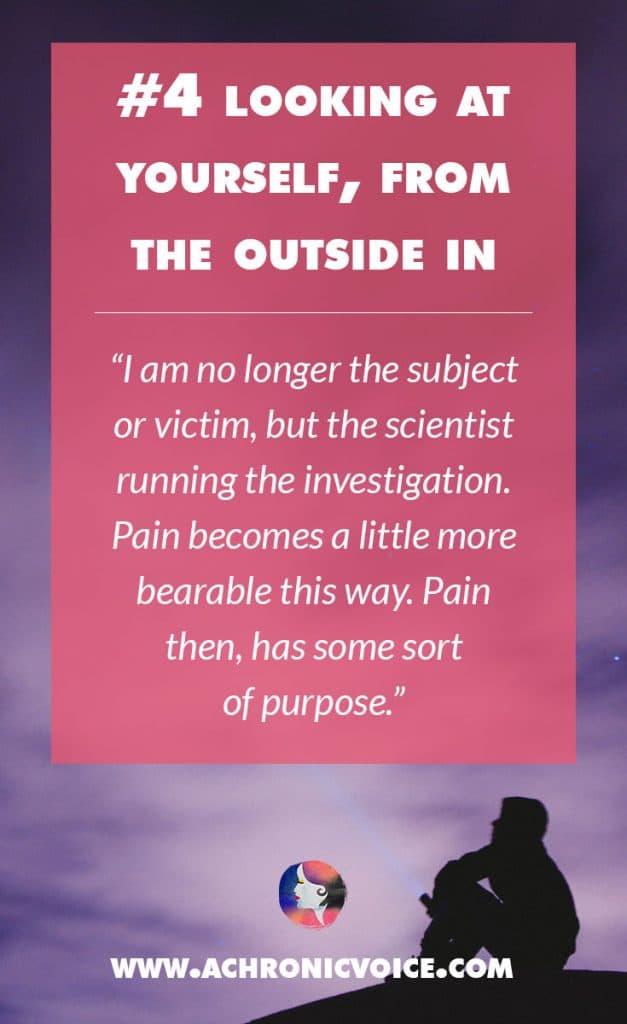 5. It Doesn’t Really Matter What We Expect From Life

This was the best lesson I learned from the book, which helped me through some depressive moments as well. Frankl taught the men who were despairing, to change their attitudes towards life. To ask, ‘what does life expect from me?’, instead of, ‘what do I want out of life?’. To look at ourselves as being the question of life, instead of asking what the meaning of it is.

I also came to understand that the meaning of life is simply, ‘to be’. To hold constant communion with life and ask her, ‘what is it that you expect from me, in this very moment?’. And then to get up and go fulfil that duty to the best of my ability. If life requires that I suffer in the present moment, then I will need to accept this job with grace. To ask myself, then, ‘what is it that only *I* can do in such a situation?’ This makes my task unique, and gives it purpose. Should you lose all hope in this life, then your one task is to continue hoping, despite.

I don’t find this emotionless or stoical at all. In fact, I find it to be a peaceful thought. In the words of a popular quote out there, ‘you have been assigned this mountain, to show others that it can be moved.’ 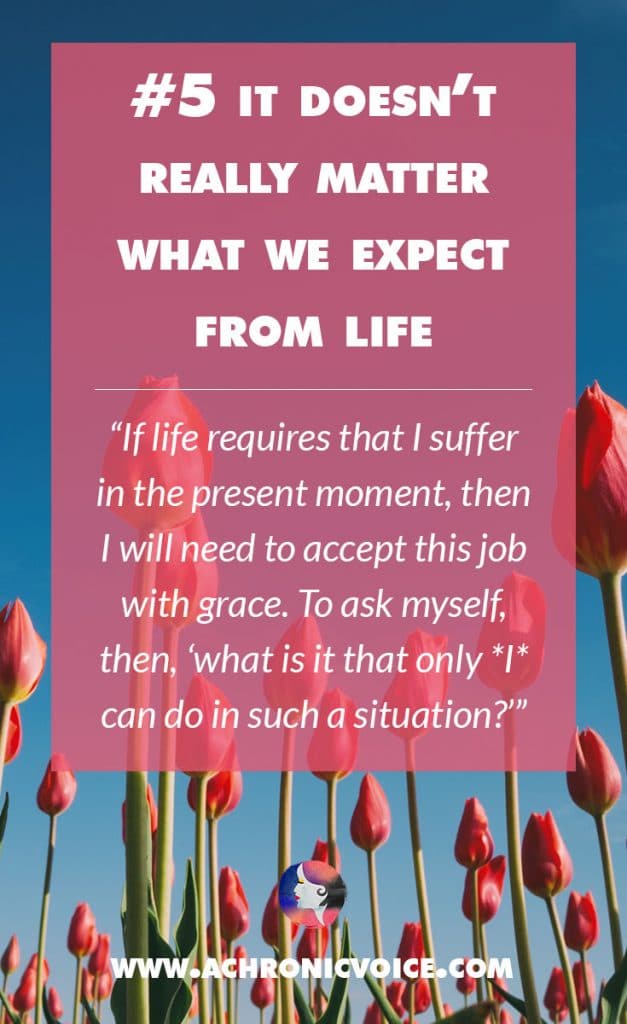 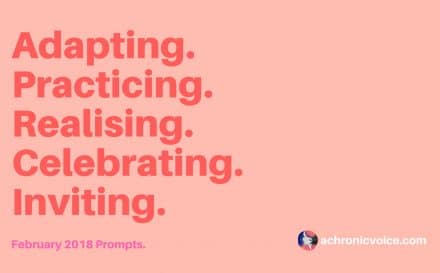 Issue #204: The Best Ways to Protect Yourself from the Coronavirus & The Role of Healthy People in Preventing the Rapid Spread of Disease 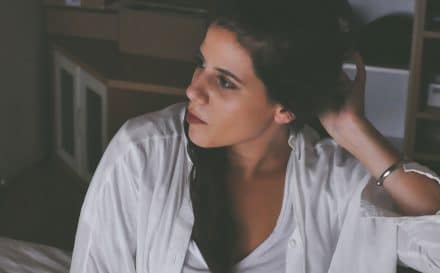 A Page From a Sick Girl’s Diary: Sometimes I Wish I was an Old Person

Issue #139: Chronic Illness Doesn’t Take a Break Just Because it’s the Holidays & Don’t Forget Those Who are Lonely This Festive Season