This is part two of a three part book review, “Man’s Search for Meaning” by Viktor Frankl. This book is full of great takeaways for those struggling to cope with chronic illness. I am sure many of us can also relate to the concepts within, as to be sick is to be a prisoner in your own body.

(Get up to date with the first five points.)

6. Self Defense Mechanisms We Employ

Some of the men in the camps had built up apathy as a form of psychological self defense. If they braced themselves for the ultimate end, then what was the worst that could happen next? Dealing with chronic illnesses year after year can build up this very same nonchalance within us. It is a neutral state, devoid of too much pain, or too much joy.

Humour is another means to self preservation, and perhaps the best form. It takes the edge off situations, and casts it in an amusing light. There is victory in that, as you have managed to enjoy a little something from within the agony. There are only two or three people who get my morbid sense of humour, but making light of situations helps me to cope. It gives me courage by diminishing the severity of the problem, thus taking away some of its power.

Frankl gave an interesting anecdote. The men were walking through a beautiful field one day, yet none of them could feel happy about it as it was foreign from their reality. They had depersonalised themselves from feeling any pleasure. This is interesting to me, because it is something I do to myself as well. Like the men, I hope and dream of ‘getting out’ one day (in chronic illness terms, that would mean a remission). Yet if and when that does happen, I have a feeling that I might panic and not accept it to be true. Who knows when danger would strike again, is it safe to let my guard down? I know that this is a thought I need to work on, otherwise, how am I ever going to get better to begin with? 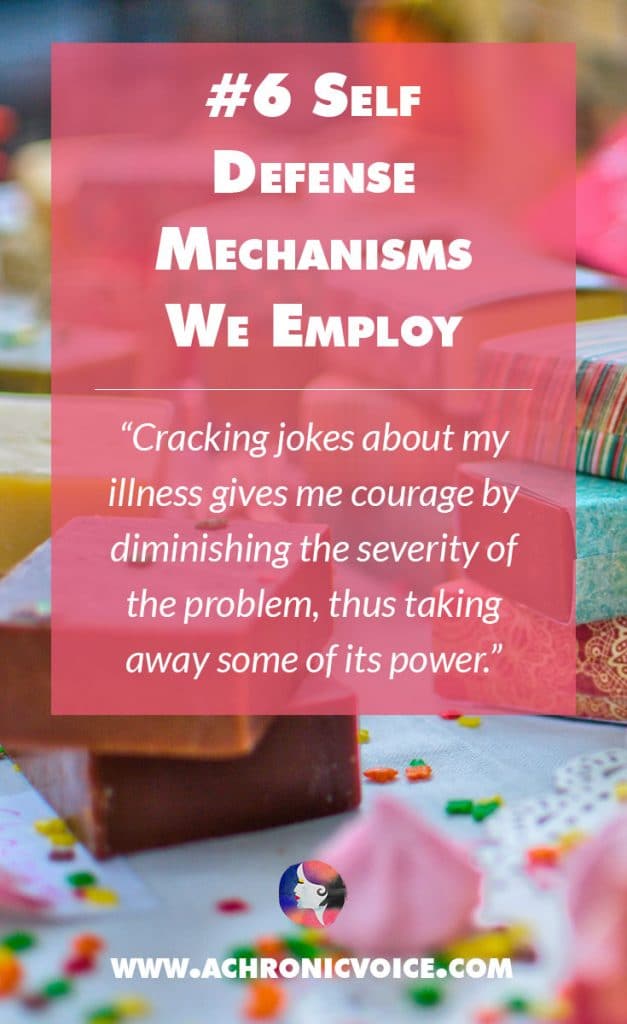 7. Be Careful of Becoming the Monster You Hate

How does a person begin to look like what he hates? By focussing the entirety of his or her thoughts on the subject, until they begin thinking in its likeness. As Nietzsche said, “He who fights with monsters should be careful lest he thereby become a monster. And if thou gaze long into an abyss, the abyss will also gaze into thee.”

Frankl shows that this can happen when presented with sudden freedom. Many of the men became the oppressors towards their former oppressors upon release. And unless you’re able to accord responsibility towards your life, there is the danger of degenerating into arbitrariness.

To live with pain and judgment from society as a chronic illness person can build up such negative effects. We may start to wallow in our misery, and become bitter about it. We dismiss anyone else who is suffering, because their pain can’t be as bad as ours. We become arrogant in our knowledge and reject any new suggestions (there’s a lot of harmful advice out there, but there’s still one or two gems). But if we want a real cure someday and want others to accept us, then we need to set the first example. To be open-minded and understanding towards the general populace. 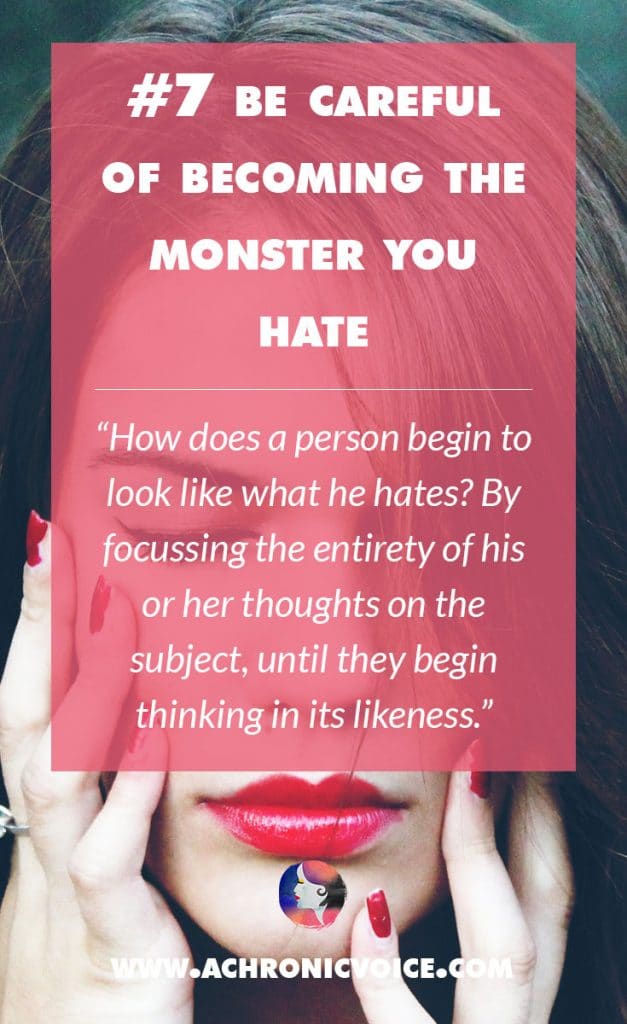 8. The Disillusionment of ‘Happiness’ as the End Goal

When you are suffering and focussed on happiness as the end goal, you forget that unhappiness still exists when you do get there. I think that this is what happens to some of us who do manage to go into remission. Life doesn’t consist of happy moments only. Pain and grief still exists despite being healthier, and this induces disappointment.

Life doesn’t consist of a constant state of being. Being aware of and accepting its colourful spectrum is necessary for a healthy perspective. It is also essential for appreciating a moment, empathising with others, and understanding ourselves. 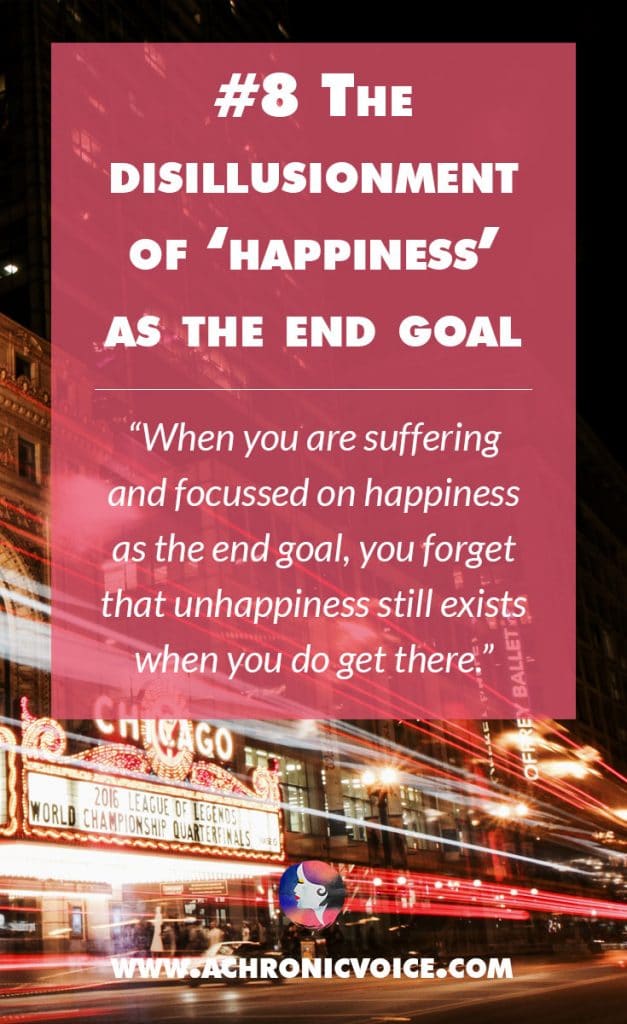 9. There is No Limit to Suffering

When the men in the camps thought that they had reached the limits of human suffering, they learnt that pain really has no ceiling. It’s always possible to suffer some more. This is a concept that I can grasp with clarity, and which has crushed my soul the most. You think to yourself when you’ve hit rock bottom, “really, how much worse can it get?”. Only to find out that there is no such thing as a bottom to begin with. This leads me to the next important point… 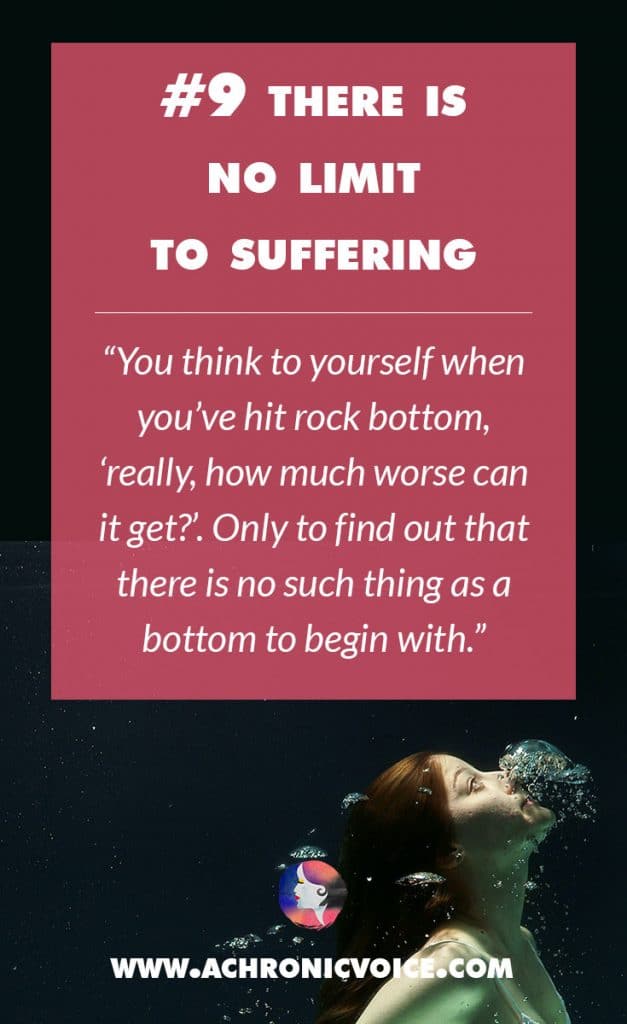 10. Opening Our Minds to New Ways of Thinking

As human beings, it is normal to feel depressed from time to time. We all go through it. Existential distress doesn’t always equate to a mental illness, however. Sometimes all you need to do is open your mind to new ways of thinking.

Living with chronic illnesses trains you to monitor the slightest change in your body. Any new pain or ache arouses our suspicion and we start analysing it. We have learned that it’s always better to nip a problem early in the bud. ‘Wait and see what happens’ has often escalated to regrettable levels of pain and distress. This habit has helped me more often than not, but I now find things that aren’t there to begin with either.

I need to retrain my brain to be open to the possibility of decent outcomes too, as it can be quick to hit the panic button. I need to start from the bottom up and not top down. What this means is that I need to focus on my core concerns so that I can rebuild a stronger foundation. Patching surface problems all the time isn’t effective for the long term. I can try to approach this by asking myself, “what would benefit my over all well being the most right now?”. And then work outwards from there. 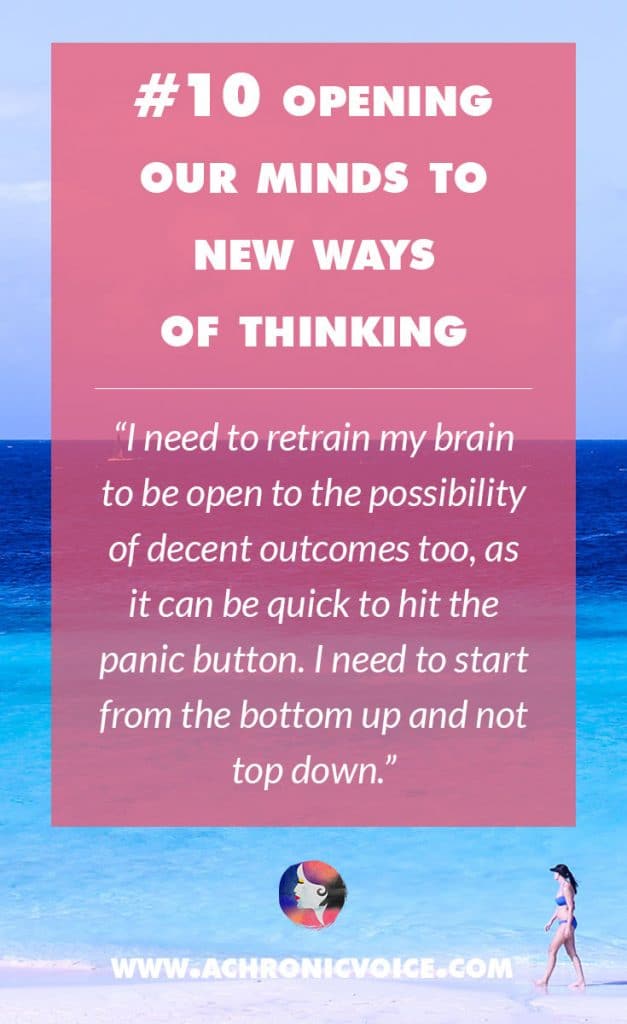 11. A Tenseless State vs Struggling For a Worthwhile Goal

The existential vacuum is a first world, modern day problem. Boredom has become a bigger problem than distress. Frankl mentions that what we need in life is not a tenseless state, one free of any worry or problem. Instead, what we need is a worthwhile goal to strive for, and the suffering that comes with it.

I like his illustration using the architecture of arches in buildings. To strengthen an arch, you do not lessen the pressure upon it. Instead, you must increase the pressure so as to make it more compact. It isn’t about decreasing tension in our lives, but increasing the tension for meaning.

Many of us consumed with pain might actually view a tenseless state as preferable. I’d give anything to escape from intense pain. It terrifies me. I’d rather live in a meaningless vacuum than to suffer day and night. This is something that the average person might not understand. In that sense, those of us who are stuck in this no man’s land have a bigger challenge to deal with, as meaning can become meaningless.

We need to convince ourselves that whatever we’re aiming for is worth the hellfire it comes with. Those of us who have no family or kids might find this an even harder problem, as you are your sole source of strength. But all we can do is try. Not because of anything, but that we are human. 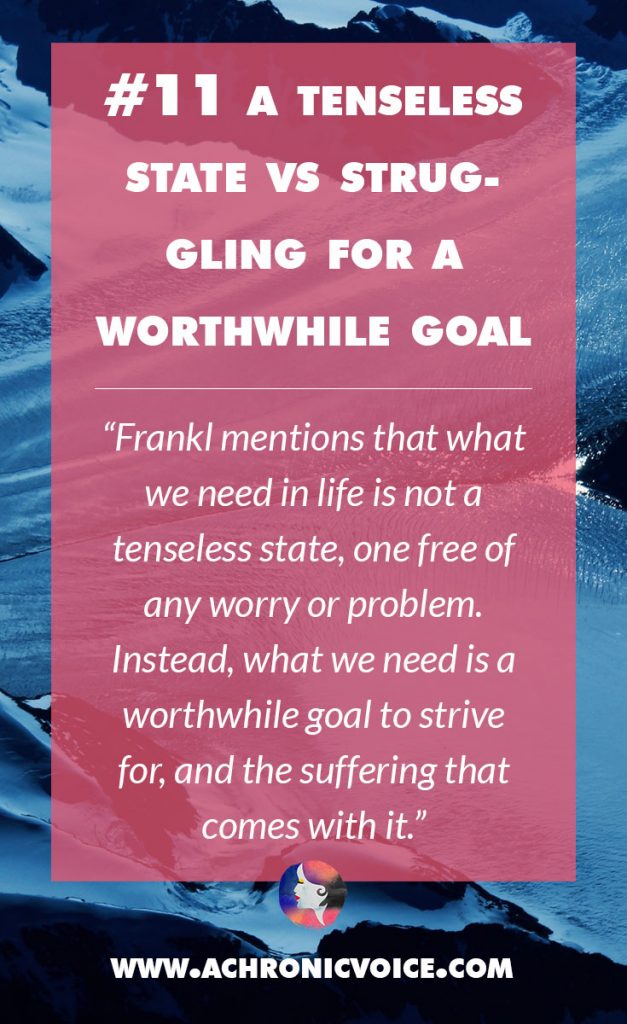 Issue #103: What Happens When the Pain Exceeds Your Coping Resources & Finding Beauty in Everyday Life Despite it All

Issue #159: Accepting Help as a Mother with Chronic Illness Only Benefits Your Family & the Power of Steroids – Good and Bad

Issue #239: The Incredible Loneliness You Feel with Painsomnia in the Middle of the Night & Inspirational Books for the Chronically Ill

Issue #204: The Best Ways to Protect Yourself from the Coronavirus & The Role of Healthy People in Preventing the Rapid Spread of Disease