In this edition: How trying to avoid stress can cause more stress. The correlation between Stockholm Syndrome and mental health. A collection of inspirational posts from those with chronic illnesses. Quotes on happiness and life lessons. A much-needed reminder on how illness can take away your control, but not your character. The simple pleasures of listening to music even while in pain. Fighting back with love amidst all our different problems. Four myths about being on opioids for chronic pain. Watch out for Powassan virus this summer; like Lyme it is carried by ticks. Great tips for eating a gluten-free diet on only $35 a week.

The Side Effects of #ChronicPain Nobody Talks Abt – trying to avoid #stress can cause more stress! https://t.co/kb6ie2e3HZ #spoonie pic.twitter.com/zh1d4TcPII

While the feeling is unavoidable in some #moments, we can still choose to aim for an overall, long term #wellness.. https://t.co/N6DAHizDLM pic.twitter.com/cKWKPQn2pr

“But the truth is that my illness took my #control, but it didnt take my character": https://t.co/Z9HkR97rUc (via @shaggycreations) #spoonie pic.twitter.com/Ry5TDff1WF

#Music is what makes danouk_32 feel the best when down with #pain! What about you? https://t.co/KXoXxVZbYG #chronicpain #spoonie pic.twitter.com/Gj88kpylIR

Fighting Back w #Love – “keep in mind that we are all struggling differently w a #chronicillness”: https://t.co/0oIK0SWl77 (by @ribbonrx) pic.twitter.com/Fmy2JnMQk6

“People in #pain don’t take #opioids to get high..try to live as normal a life..": https://t.co/aH4nPiTVHp (by @chronicmom1) #chronicpain pic.twitter.com/n15fipffRp

#Lyme Isn’t the Only Disease #Ticks Are Spreading This #Summer – watch out for #Powassan virus: https://t.co/NbWLF6Ioo3 (via @WIRED) pic.twitter.com/PjPIR2QAMM

Issue #156: Invisible Disability Can Sadly Incite Doubts at Work & When it Feels Like the Last Straw, it May be That You’re Too Tired to Deal for Now

Issue #124: Strange Migraine Cure Suggestions from People Who Don’t Live with It Daily & You’re Allowed to Enjoy Your Life Despite Disability or Illness 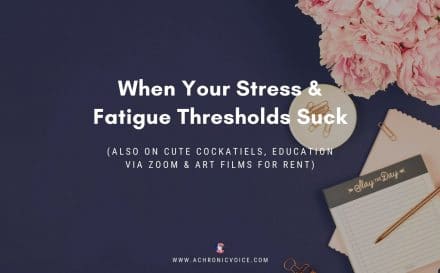 Issue #90: Stress Less by Cultivating Your Tribe & the Dilemmas of a Mother in a Wheelchair