In this edition: Dealing with the chronic illness cards we’ve been dealt with in life. Choosing to deal with and fight the pain of mental abuse after 22 years. Impossibility is merely a riddle. The frustration of proving her CRPS (chronic regional pain syndrome) is real. Our current mental unhygiene as human beings. The relation of substance abuse and mental illness in a dual diagnosis. Handmade goods by spoonies to raise awareness for lyme disease. A strong and sensible voice raising issues of pain medications for chronic pain. 28 helpful apps for managing chronic conditions. What your blog needs to be legal.

“It is the lot of a #spoonie to somehow live w this #uncertainty, and the #fear that goes w it": https://t.co/oVAL0Hb9wT (by @siobhansimper) pic.twitter.com/gEbjEUaMH0

“most impt words an #abuse #victim can hear: I believe you. W/o hesitation…”: https://t.co/jy5km8eljh (via @SurvivingMyPast) #mentalhealth pic.twitter.com/48xtp9ClEj

Here's one of my own ? I think we are quite presumtuous as a #human race… https://t.co/nDZQCtOVee #impossible #possibility #selfawareness pic.twitter.com/9SUwsvI5zY

[Archives] Our Current #Mental Unhygiene – What has happened to us as human beings? https://t.co/VBUJ06sY8t #mentalhealth #humanity #society pic.twitter.com/Du4Cr9VK6v

“So if we do take #pain #medications & are functional people, we are addicts": https://t.co/mCHFMnV8I8 (by @ribbonrx) #chronicpain #spoonie pic.twitter.com/8mlQooVLdN

28 Of The Best #ChronicPain #Apps – these look like they could be helpful! https://t.co/31r81TZcPW (via @paindoctor) #digitalhealth #spoonie pic.twitter.com/1nEZ5ETsY5

7 Things Your #Blog Needs to Be #Legal – important to know: https://t.co/EjSbWXO7xv (via @jackiejade) #spoonie #blogging pic.twitter.com/vjfdFVJUfN 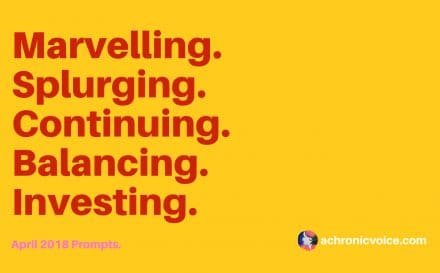 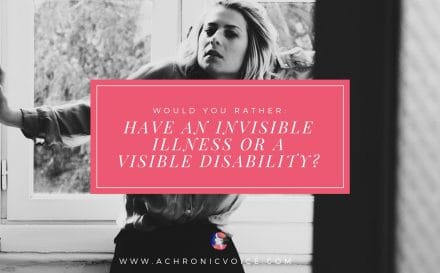 Would You Rather: Have an Invisible Illness or a Visible Disability?

Issue #191: Sickness Does Not Have a ‘Look’ & Finding Ways to Enjoy Life Despite the Constant Downpour

Issue #214: The Importance of Pacing to Prevent Pain Flares & How Blogging Opens Up Doorways for Conversations and Awareness