In this issue: Participate in the new weekly blog boost linkup on A Chronic Voice. Simple ways to raise awareness about chronic illness. Are people with chronic illnesses good at self-care? Five coping skills for depression. How a spoonie’s life was saved by a nurse whom she’s never met. The struggle with independence, and the vicious cycle of needing more help. Redefining “have to’s” on our own terms. The eventual need for caregiving when dating someone with chronic illness. A compilation of videos to exercise your major muscle groups, especially if you’ve been bedridden. Celebrating the powerful kindness of caregivers.

A NEW Weekly #Linkup on My #Blog to Give Yr Own Fav Posts a #Midweek Boost. Join here: https://t.co/ml53xvPPue #chronicblogs #spoonie

"not talking abt preaching to every1..but if it's appropriate, do talk abt it": https://t.co/OeeJ6p6d3O (by @not_just_tired) #chronicillness

“where do u come in yr list of #priorities?”: https://t.co/237M3B0NEf (by @happyiihgirl) #chronicillness #selfcare #advocacy #spoonie

"Each pill assists my #body w a duty it’s supposed to perform on its own": https://t.co/CMkG9BN74Q (by @lymeroad) #lyme #chronicillness

“Rather than making chronic me easier to deal w, exasperate my symptoms & need more help”: https://t.co/PDczgO7g13 (by @allisonjdm) #spoonie

“When we forget our worth, we forget what really matters to us”: https://t.co/6FrY9gh4l4 (by @hilarybarnett) #selfworth #wellbeing #spoonie

“Wanted to know if he could take care of me if – no, when – the time comes”: https://t.co/RoIoChWFtQ (via @TheMightySite) #spoonieproblems 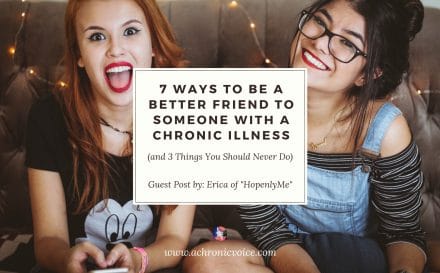 Issue #150: Dealing with Chronic Pain Isn’t as Straightforward as Popping Painkillers & What Can You Do To Make Your Day a Little Better?

Issue #271: Writing and Journaling for Stress Relief & Enjoying Art with a Disability