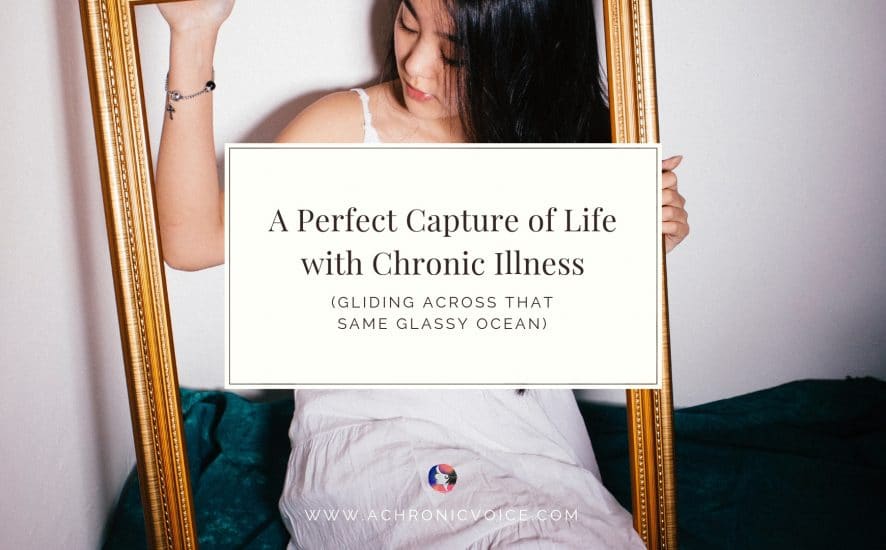 A word that could probably sum up life with chronic illness is ‘mundane’. Sure, it has its (very much unwanted) moments, but for the most part you’re just cruising along, pacing, trying to avoid those unwanted moments. It’s a sadistic, adult version of hide and seek. Either I’m hiding from my over-active immune system as it tries to smoke me out, or I’m looking for where pain has hidden all its rotten candy. This month is one of continuous recovery, new treatments, and undecided plans for me.

*Note: These writing prompts are part of a monthly community activity I host. You can find the link to join us at the bottom of the post. We’d love to have you with us! Trigger warning: mentions of death. 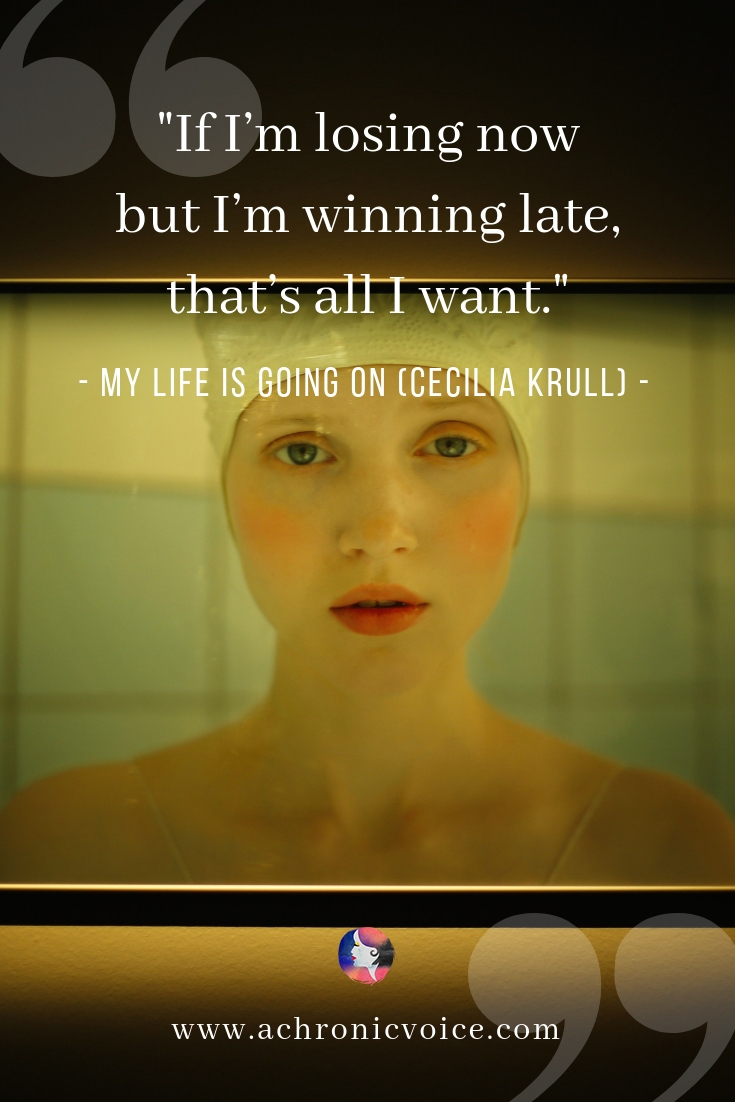 “If I’m losing now but I’m winning late, that’s all I want.”
– My Life is Going On, Cecilia Krull

Here I am, still gliding across this same glassy ocean in August. Are you bored yet, reading the same thing rephrased, month after month? Perhaps these linkups do indeed capture what it’s like to live with chronic illnesses – how mundane it all gets. Even though the storms do get pretty rough and even life-threatening at times, no doubt.

There’s still no land in sight, and the skies have yet to fully lift their veil of gloom. A touch of calm spreads across the waters, but it’s more eerie than serene in nature. What lurks beneath, above and beyond? Everything is opaque. I adjust my course with a hesitant pause on occasion, but mostly I allow the tide to take the lead. Who can defy destiny after all? We are at the mercy of mother nature. A cold breeze makes me shiver, and I think by instinct, “please, not too much pain”. I make this request of the universe, to no one in particular. The wind rustles my hair in reply. My hair mussed up means nothing to me.

For how long do I need to sail? A small slice of shore would be nice, even if I’m forbidden to land. Although stepping onto soft sand would be nice, and I would kiss it for all its cliché worth. Other dangers lurk on land and there will be new problems to solve, but there will also be more resources at my disposal. Land feels like a distant memory. What does it feel like, to have that little bit of security? That illusion can feel so tangible when you’re not stuck on a tiny boat, floating on an open ocean. Land is fertile ground for planting arrogance, but a taste of its fine produce would be nice. With each passing day, these memories grow rosier and more colourful. I blow them like glass, reworking their translucence into something more wondrous to behold.

My calendar for August actually looks quite busy. There’s the appointment with the neurologist, rheumatologist, gynaecologist, and cardiologist. Do you know what that means?

Something that my parents still help me out with, when they should be retiring soon. They just helped to pay off last month’s $3,000 A&E bill, because there’s no government subsidy for A&E. Let’s hope that we get the green light to claim it back from my insurance company. I miss those days when I had my own pay cheque, and could afford my own holidays. There was a price to pay – massive flare ups, and I wouldn’t trade that sort of pain back again. But damn, it was nice to go on holidays. Nothing makes me feel more alive. I should rephrase that – travelling makes me feel most alive. I do enjoy fancy trips in nice hotels. But I feel most alive in places where I don’t understand the language, where it’s different from back home. I love going far far away from the city on overnight trains, in search of ancient artistic treasures, and mindblowing wonders on our planet. It makes me feel small and insignificant. But it also makes my problems feel that way.

Maybe I should pull up my big girl panties and try again. Writing and blogging aren’t earning me enough income for now. We’ll see what I’ll have to do, when forced to a crossroads. For now, I cruise along on this tiny ship of mine, and will try to keep it afloat.

I will also need to insert Nexplanon this month, as I’ve already suffered two devastating and bloody corpus luteum cyst ruptures. My blood count had fallen to dangerous levels both times, as I bled continuously from my blood thinning medications. It’s always an ordeal finding me blood for transfusion as well, due to my rare blood conditions. There were no perfect matches both times, and I shudder to think what would have happened if my blood count had dropped a mere half a pint more. Such ruptures do happen to healthy women during ovulation too; but they mostly just feel a mild pain before it subsides. None of this egg explosion nonsense.

(Read about my experience here: What it Feels Like to be Refused Treatment by a Hospital’s A&E)

The problem with birth control are the interactions with blood clotting disorders such as mine. Almost all of them increase the probability of blood clots, which is the reason why I’ve never even considered them before. To reduce the risk of this happening, we will need to avoid the ones with oestrogen, and select from a range of progestin ones. Amongst the three most suitable options, I had to eliminate two simply for the fact that they can cause bone loss. I already have osteopenia from long-term steroid usage. So that left me with Nexplanon. The only comfort I get from this idea is that the side effects are reversible immediately upon removal, including fertility. I like having my periods regularly, but let’s see how this goes.

Speaking of which, my two parrotlets dropped dead in July. Dropped dead are the right words. Archer II fell off his perch like a feather, with barely a sound. We were having dinner and watching the first episode of La Casa de Papel (Money Heist), and it was a few minutes before we noticed his dead, warm body upturned on the bottom of his cage, claws gripped like a vice. I was bawling my eyes out in absolute shock. I thought he might have been still alive. Weren’t those his eyes peeking open? But no, my ex-partner said he was dead. We buried him under a big tree in the park. There were a few homeless people around, a sight that Singapore tries to erase from the public eye for the most part.

That same night his partner, Piper, had a night fright. She could no longer grip onto the branch, and was stuck on the ground. That didn’t bode well, and she was dead within a few short hours, too. We dug Archer II out and unwrapped his handkerchief grave. Hie eyes were wide open again, so I asked my ex-partner to shut them. But he replied that there were none left – ants had make quick work of them. There were only black orbs of space staring back at us. The only comfort I derived from this is that they get to return to the earth side by side. Archer II adored Piper. She was his goddess, and he worshipped her night and day. I can only imagine the extreme joy on his face and his excited squeaks, to see her there with him on the rainbow bridge. Just as they died, new life was born. Two cockatiel babies hatched the day before and after. Is this the cost of life?

(Trigger Warning: Images of dead birds to the right.) Goodnight my sweet little babies, who literally dropped dead one after the other without any warning ?? Archer adored Piper, and the only comfort I get is imagining how excited he’d be to see her at the rainbow bridge, together with him. Read my latest blog post for more (link in bio).⠀ .⠀ .⠀ .⠀ .⠀ #achronicvoice #spoonie #spoonielife #spoonies #spoonieproblems #invisibleillness #awareness #mentalhealthmatters #mentalhealthsupport #chronicillness #chroniclife #chronicpain #chronicpainwarrior #chronicillnessawareness #chronicfatigue #disability #selfcare #selfawareness #wellbeing #parrotlets #restinpeace #imissyou #linkup #writingprompts #birds #cuteanimals #truelove

I plan on handfeeding this new batch, even though they will all need to go to new homes. This period is especially crucial in a bird’s life. It is so much harder to bond with them after. I want to earn their tiny trust, and for them to let me ruffle their little punk crests, and coddle my cheek against theirs. This is the price of life. It isn’t an exchange by choice and I would much rather my parrotlets were alive, but even I am only part of its neverending, unbreakable cycle.

You know what would really inspire me now? A trip overseas. Yes, I’m jumping back to this topic. Probably sounding a bit of a spoilt brat, too. But yes, that would really inspire not just a little, but a lot of life back into me. It was after all, my primary source of motivation when I was healthier. Scratch that; back when I was younger, more ignorant, and more willing to put up with stupid amounts of pain.

There are many ideas and plans swimming around in my head, with this recent cordial breakup and loss of support in many ways. I’d like to go back to school, travel, do this and that and that. But at the end of the day, it all goes back to paragraph one.

Thank you for reading, and I hope to read your responses for June’s prompts too. CLICK HERE to submit your own entry, and to read about what others are up to as well!

“If I’m losing now but I’m winning late, that’s all I want.” – Theme song from Money Heist, when Archer II passed on. 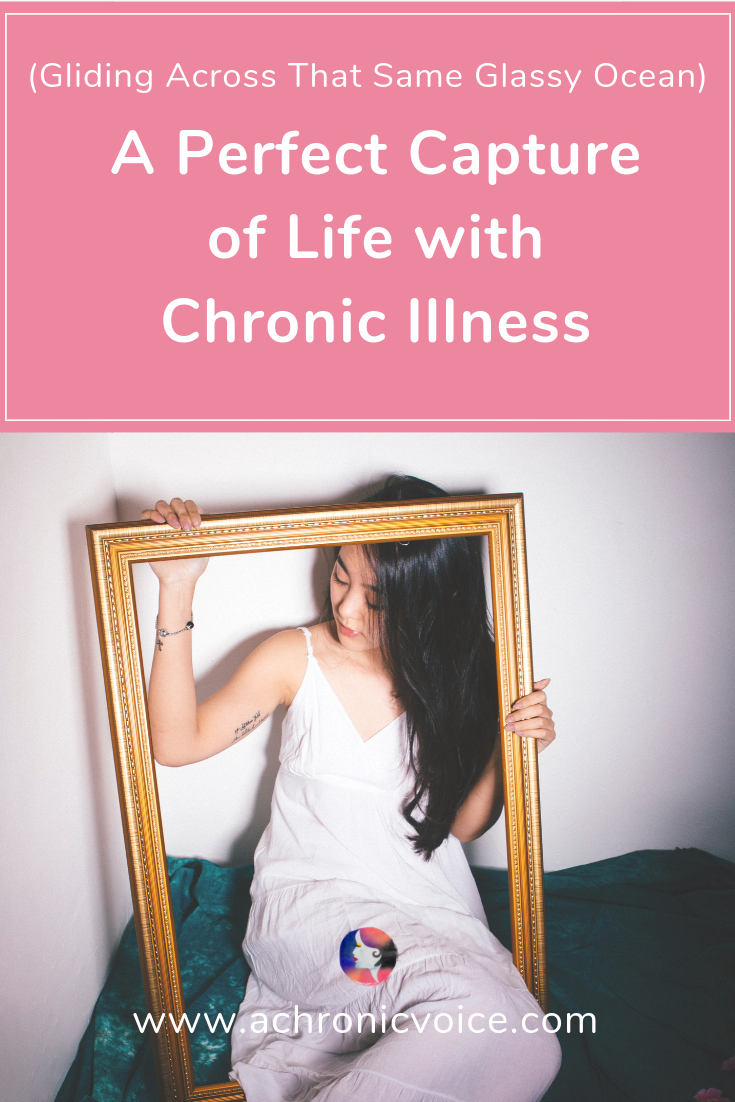 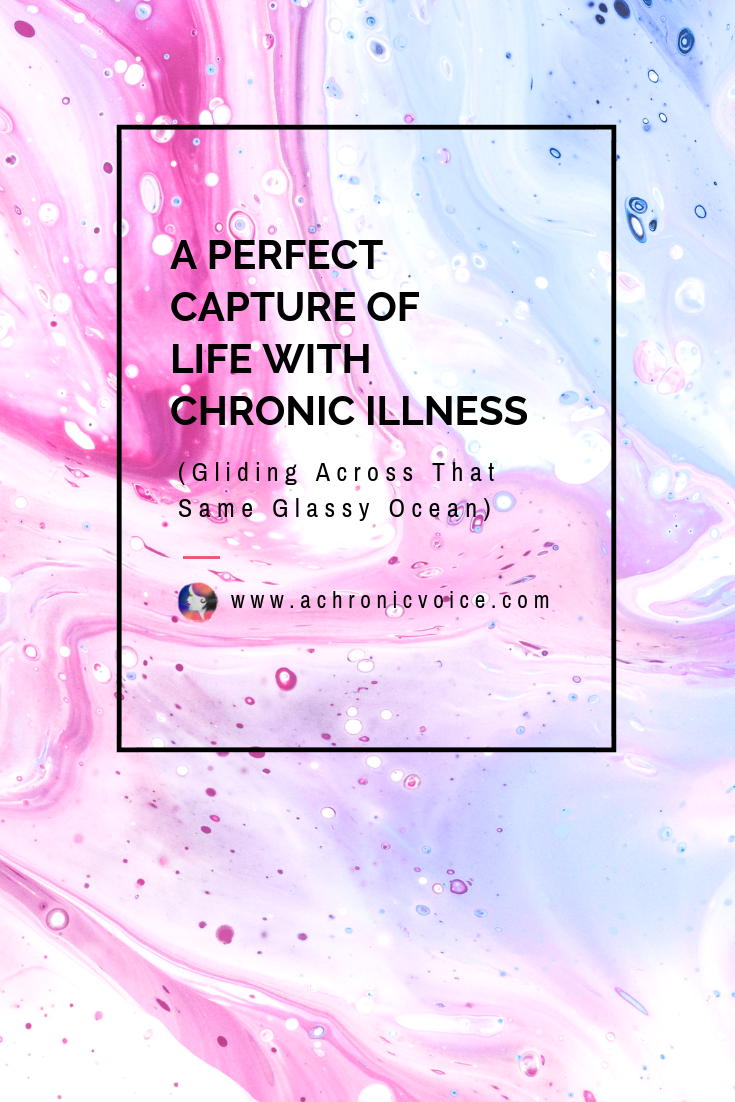 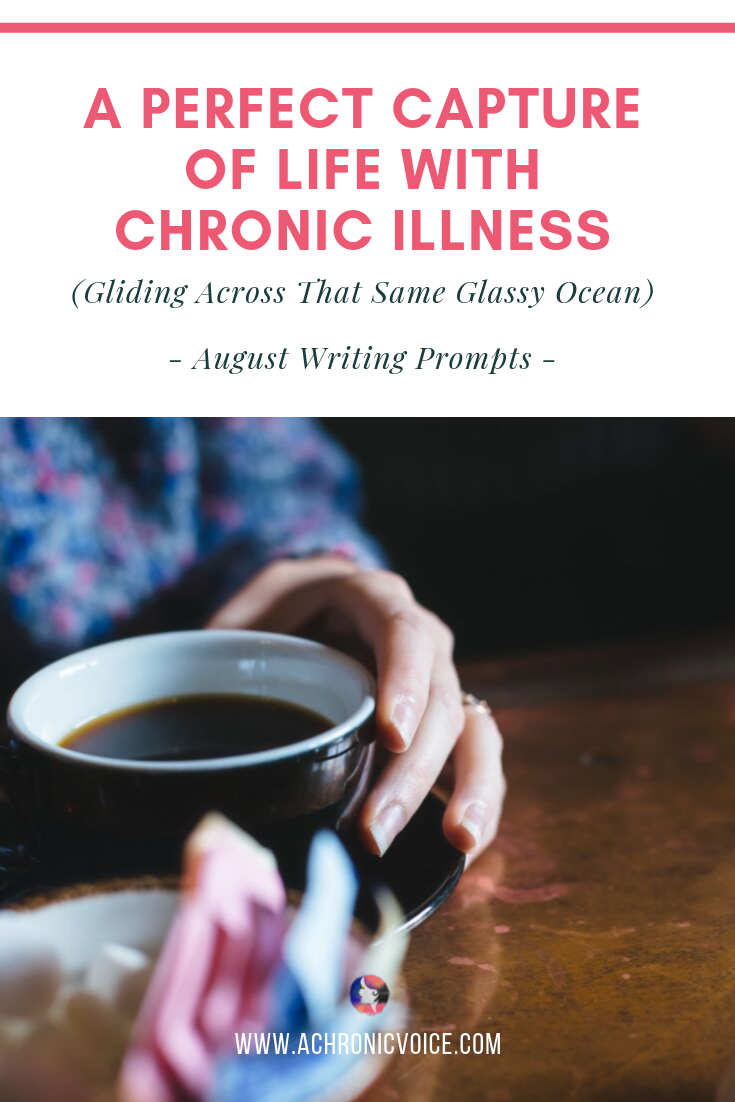 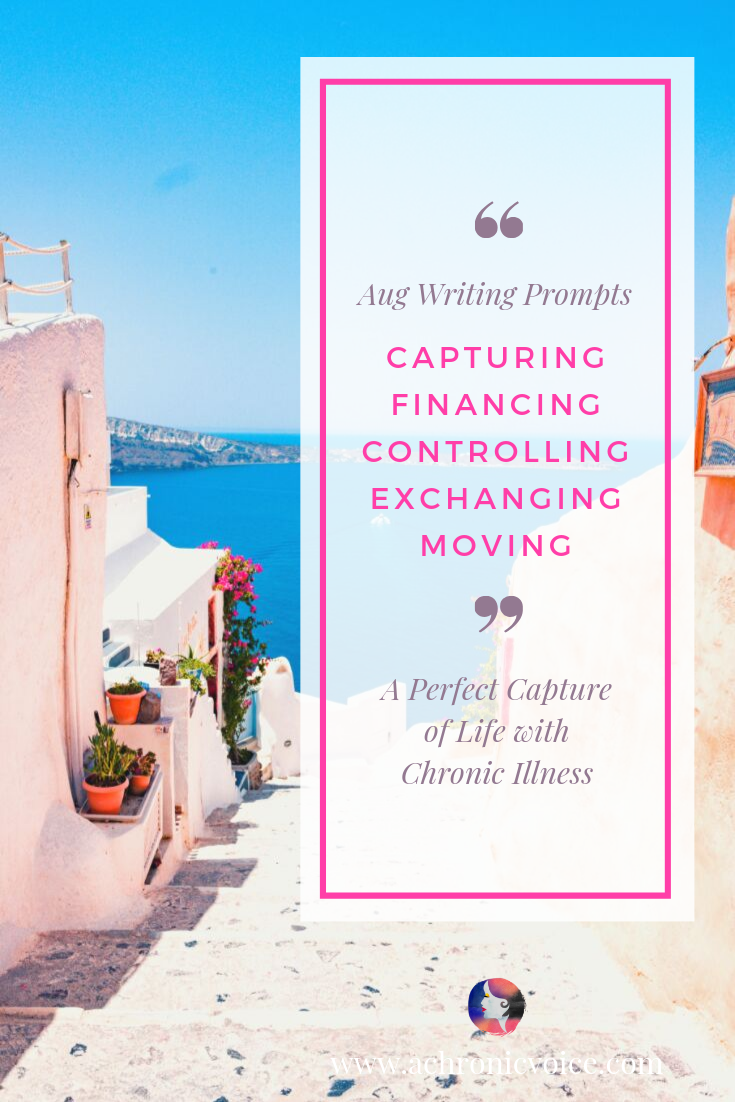 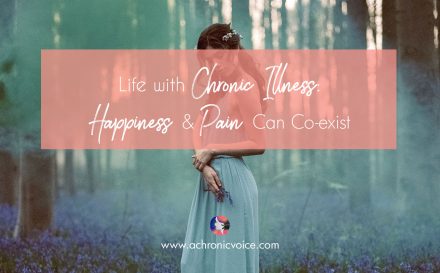 Issue #276: Interesting Myths About the Brain That We Believe & An Interview with a Doctor on Heart Rate Viability (HRV)