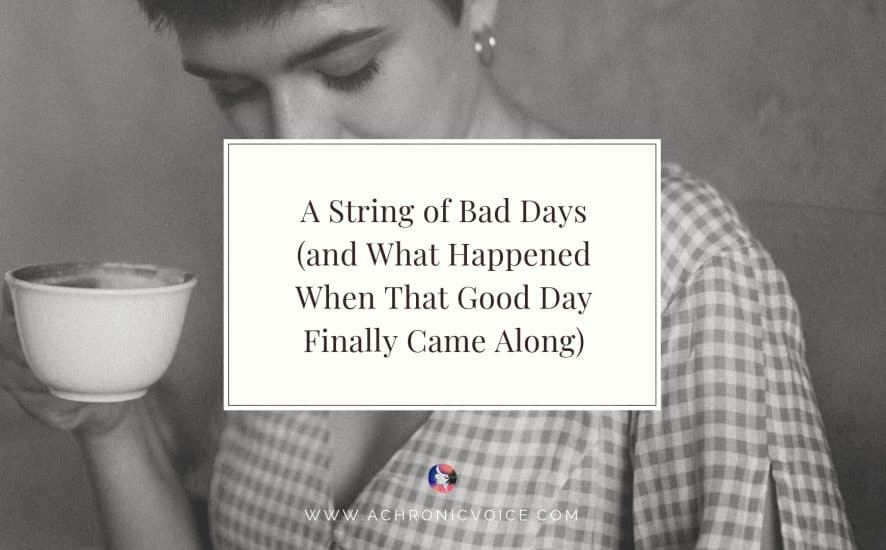 I’ve been in states of depression again of late. I’ve been through this cycle enough times to know that my brain chemistry is messed up again, although I have cause to believe that my epilepsy has a hand in them as well. I feel somewhat hypomanic at the same time, but not that I really know what that feels like? Sometimes these two contrasting sensations happen along their own thread in time, and sometimes they happen all at once. As such, my (unhelpful) psychiatrist diagnosed it as a mixed state, and increased one of the medications I share for my epilepsy and mood.

These emotional turbulences aren’t only rough for me, but for my partner as well. He bears the brunt of it, seeing that I’ve isolated myself from much of the outside world. “What’s wrong?”, he’d ask. “Nothing”, I’d reply through frustrated tears. But that is the simple truth – nothing’s wrong. Or rather, nothing should be wrong.

Who Knows What it Could be?

None of my doctors have a clue either, and have been passing the baton around, though not in a cruel or intentional way. My rheumatologist thinks it might be a neurology problem, whilst my neurologist refers me to my psychiatrist, who suspects the root cause might be autoimmune in nature.

Whilst my neurologist doesn’t think that these symptoms have anything to do with my latest seizure, my partner noted that the behavioural changes began only after. (Read: So this is What a Seizure Feels Like) Combined with the new nerve tingling issues, sudden fatigue episodes, brain fog, random heart palpitations and whatnot, I have reason to believe that it’s all tied back to my brain and central nervous system. But as it goes, nobody really knows, as many of these symptoms are generic ones, or overlap with co-morbidities. All we’re doing each time something new arises, is to play a sick game of medication trial and error to try and control the symptoms.

Chronic Fatigue is a Bitch

Thinking in itself has become an arduous process. I’ve been having a hard time telling left from right, and numbers confuse me. I need a calculator to compute 2 + bloody 5. The fatigue comes in sudden waves, and blackjack me from behind. It isn’t the logical, linear equation of ‘minus energy = more fatigue’, more like, ‘whoa what just hit me. I’m flooded with fatigue, help!’

Now I Remember Why I Don’t Do Yoga…

I also went for a beginner’s yoga class a while back. I hadn’t been to one in years, and thought a few ‘light stretches’ and sweating it out would be good for a healthy push. But I remember why I stopped going to yoga after the class.

Besides the fundamental worry of missing the class due to the unpredictability of my illnesses, I returned home with bruises. I need to avoid contact sports as I’m on blood thinners for Antiphospholipid Syndrome, a blood clotting disorder. You’d think that yoga is an individual sport, but the pushing against, flipping around and whatnot is actually ‘contact’ in some sense. On top of that, I had forgotten about my nerve issues, so downward dog and the asanas that followed were actually painful.

One of our budgies, Sadie, escaped from her cage as well. She wouldn’t have much chance of survival out there, but you never know. She’s disabled and can’t fly due to a wing deformity, and had her toes bitten off before we got her. Whilst she isn’t tame or cuddly, I respected her the most out of all my birds. In some sense, I could relate to her the most due to her disabilities. She inspired me through her survival instincts and kickass attitude. Whilst the other birds would fly and land on high up places, she’d grab onto the curtain and pull herself all the way up to the top. I will miss her spirit that lit up the apartment.

A Very Important Reminder About Life

All this down time has made me realise something important, so perhaps it was worth it after all. It’s been a real struggle trying to get any work or blogging done, even though I’m not ‘busy’ per se. This has led to a stupid but vicious cycle of guilt, which has led to sleepless nights and unproductive days. I accomplish nothing despite all the hard work worrying, but it’s like an infinite loop that has crashed the system.

But one morning, I woke up and actually felt a little better. There wasn’t any special event, my mood has just been that erratic. I sat down, had my coffee, and then cranked out not just one, but two articles for work! It’s funny how I learn many lessons throughout my life, yet forget them so easily as well.

Saving My Energy for the Good Days

This little gift of a day has reminded me that it’s okay to let everything go on the bad ones without holding on to guilt. They don’t last forever, and I need to save my energy up for the good days. When one does come around, I can then execute my tasks at a higher quality, as opposed to going around in exhausting, unproductive circles.

When I’m unwell, whether physically or mentally, then I simply need to rest. I need to be gentle with myself and allow my body to just be. I need to be patient with the healing process, as this can only be beneficial in the long run, and is how better days are ushered in. Our bodies heal at its own pace, to a rhythm that must be respected. So go lay your head down, and rest up to your fullest. Because when that good day comes around, you’re going to be amazed at all that you can actually achieve, but only if you help your body to heal today, right now.

*Note: This article is for educational purposes and is based on my personal experiences. It is not to be substituted for medical advice. Please consult your own doctor before changing or adding any new treatment protocols.

Read More: Today is Not a Good Day to Make Decisions 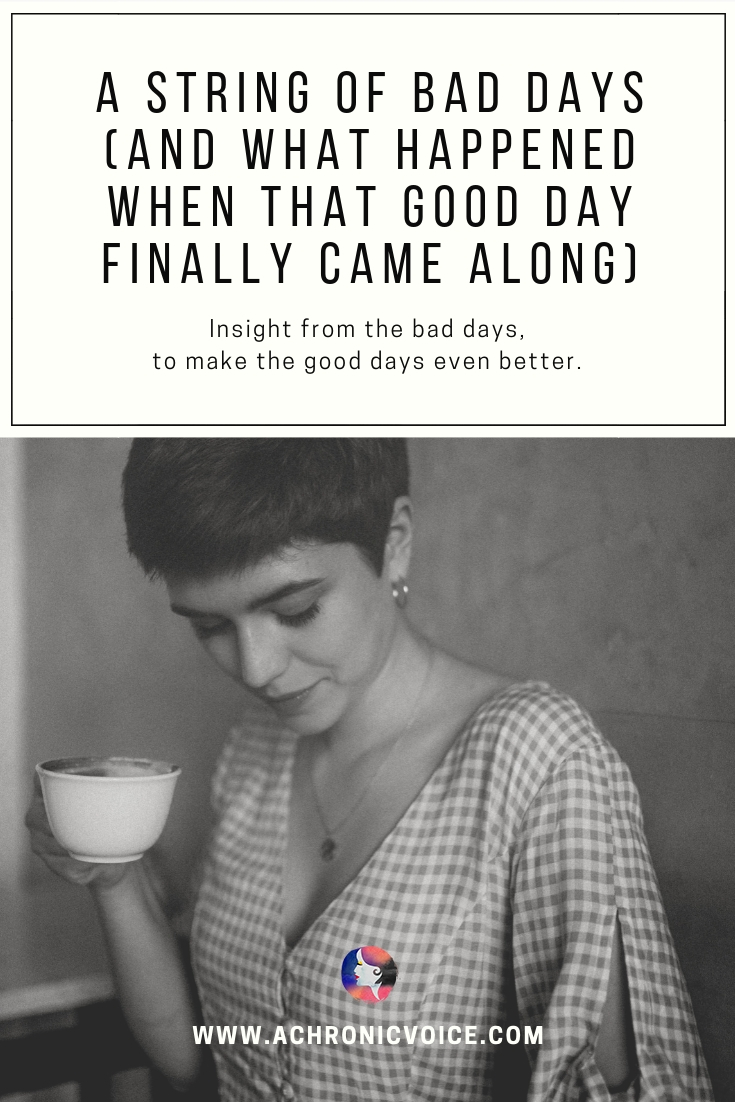 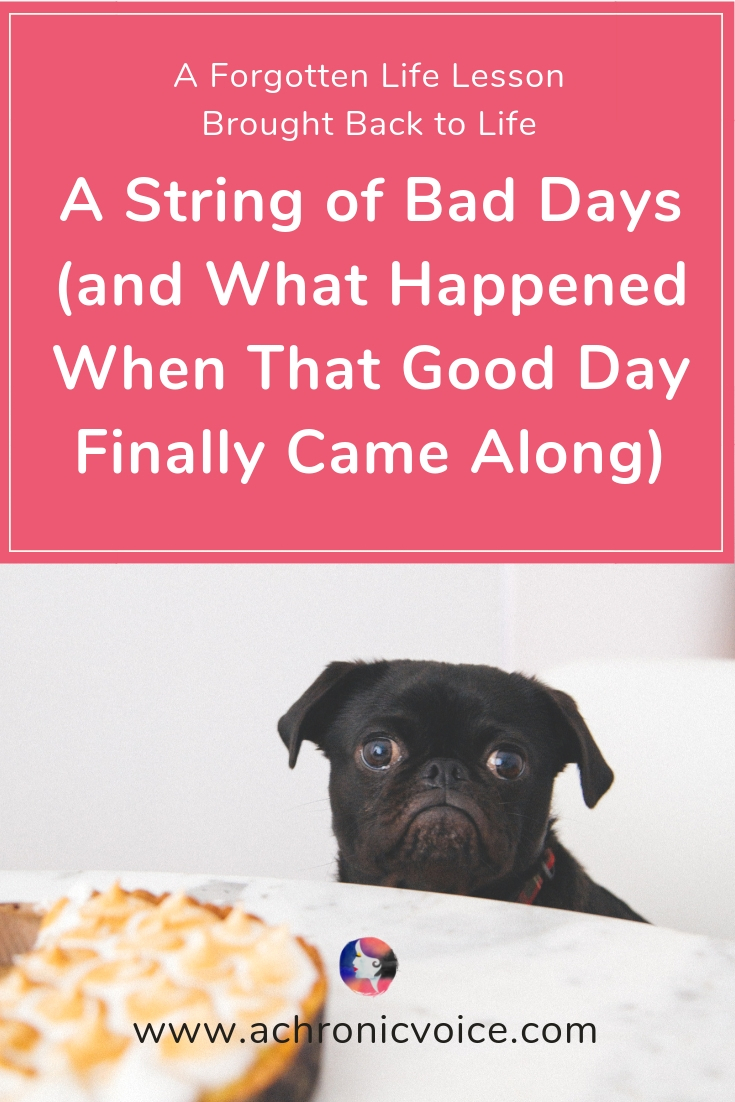 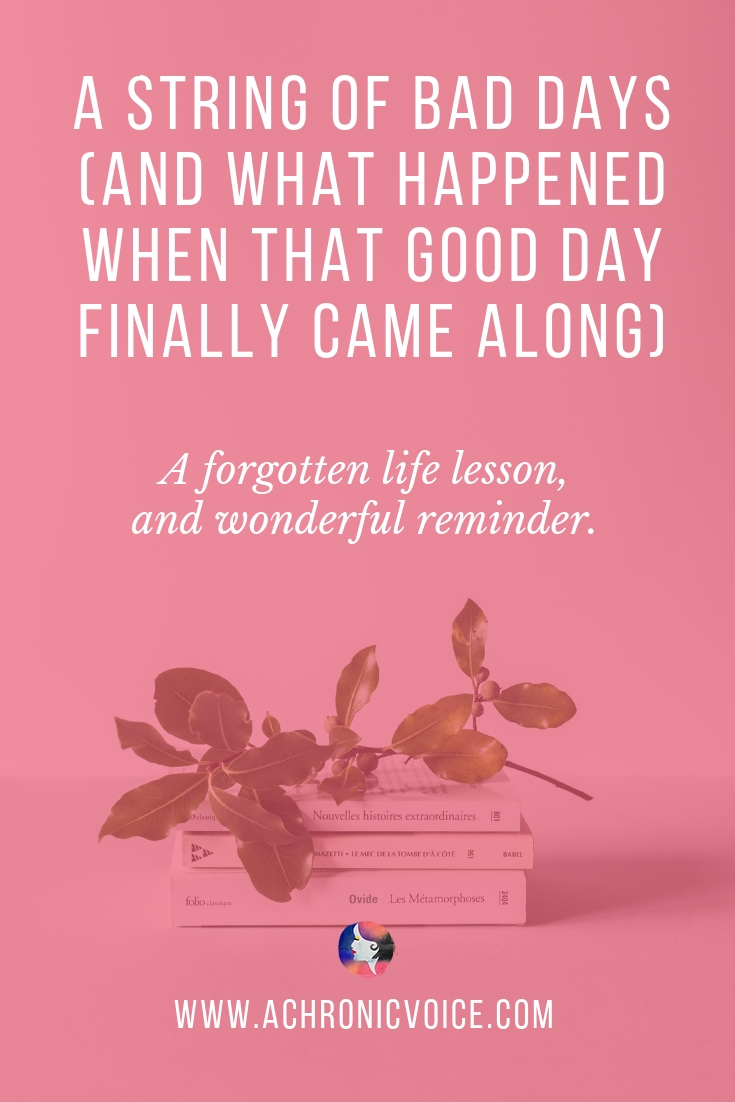 Issue #91: The Celebrities Who are Using Their Pain for Good & a Spoonie Wish to You for the New Year 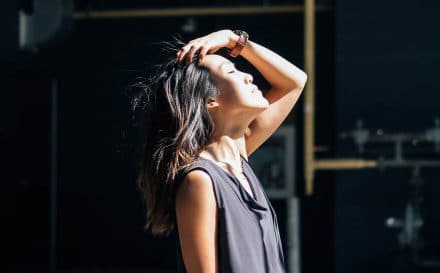 Chronic Illness is Expensive, but Here’s the Real Reason Why

What’s it Like to be the Mother of a Sick Child? (Precious Insights from My Own Mum)