A very warm welcome to our weekly curation of most popular tweets from our Twitter feed! This week there is much focus on chronic illnesses itself – coping with loss and the grieving process that will happen, and attempting to live our lives to the fullest possible. We also look at how bad science can mislead millions of patients, and the sickness in the fabric of our society that makes being ill feel shameful. We also ponder as to why distinguishing between equality and equity is important, warning signs for depression and the benefits of getting comfortable with uncertainty. To end it all of, there are some great quotes to inspire you for the week ahead. Happy reading!

7 Ways She Copes w Loss of #Identity After a #ChronicIllness Diagnosis – yes it's truly a #grieving process: https://t.co/6VR11nKZvi pic.twitter.com/zPb8tZ4GWe

A #quote to remember, on what #selfLove is all about. I need to welcome, embrace, respect & enjoy my own company… https://t.co/FzoFOaNS5E pic.twitter.com/wLEqMJNb1q

The Sickness in #Society That Makes #ChronicIllness Feel Shameful – who are we to judge: https://t.co/IJEWWqXGTj (by @KMaguirePoetry) pic.twitter.com/Qkpoouwdx6

#Depression #Symptoms & Warning Signs – when you're depressed it can be hard to tell: https://t.co/9lWPQ5Vn30 (via @helpguideorg) pic.twitter.com/BndraqLehM

Benefits of Getting Comfortable w #Uncertainty – deliberate your #actions if largely driven by need for #closure: https://t.co/3JeCVcIdtK pic.twitter.com/25HNjQo71H

Just because it is so rare & precious, & might be the only thing that saves you in this #life 🙂 https://t.co/tO5Vgqyz46 #spoonie #selfcare pic.twitter.com/ZYNcRRi0MN

#Blogger of the Week: Sheryl at ‘A Chronic Voice’ – I somehow missed this one fr 2 mths ago! 😮 https://t.co/keSFdCEr22 (via @ChronicBlogs) pic.twitter.com/UZtg73Fi6j

I Won't Apologise for Having #Fun While #ChronicallyIll – what do you expect us to do every day? https://t.co/4e0riCtaV7 (by @WriterDenise) pic.twitter.com/W6KN76qmcb

The Difference Btwn #Equality & #Equity – impt distinction because we're all made differently: https://t.co/LtfJcFGSNb (by @carlalouise01) pic.twitter.com/gVV4Ng6RSC

Issue #79: Things You Fear When You Live with Pain & Being Sincere with Your Positivity

Issue #88: Things That Make Life Worth It Despite Chronic Pain & a Homemade Happiness Jar 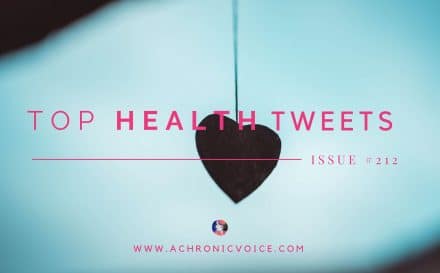 Issue #213: The Link Between Migraines and Fibromyalgia & How to Communicate Your Pain Clearly to Your Doctors