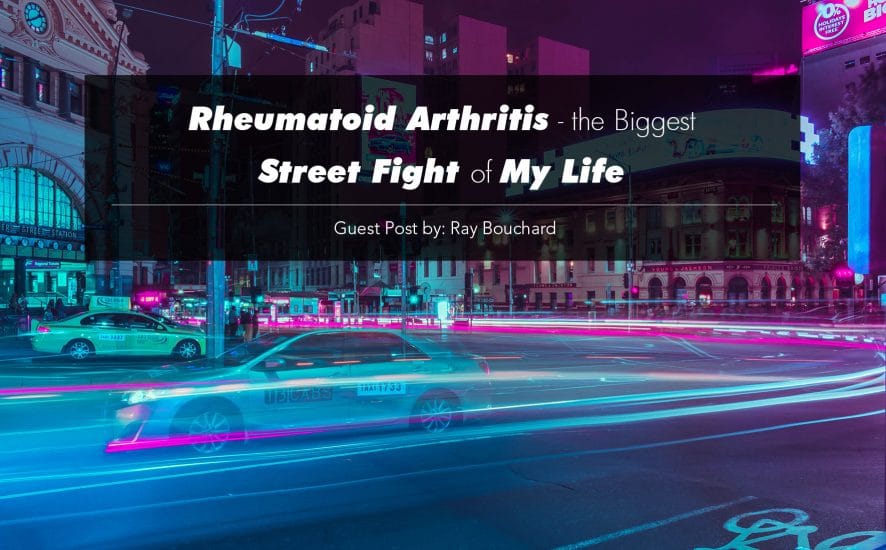 My Name is Ray, and I Have Rheumatoid Arthritis

I was lucky and did not always have Rheumatoid Arthritis (RA). I did not have RA as an infant, nor as a child, teenager or younger adult. Like I said I was lucky, unlike millions of others who have Arthritis. This is my story, with a supporting cast of the most caring of doctors, nurses, therapist, scientists, and some new and amazing targeted therapy.

First a little bit about myself. I am a husband and father, a brother and son, a friend and a gentleman. I was 61 and at my peak both physically and professionally, but that changed overnight. This is my journey with Arthritis, and trying to co-exist with an autoimmune disorder is like a street fight.

It All Started One Fine Morning

On October 29 2015, I got up like every other morning, but just didn’t feel right. I pushed through it and got going. Later in the day the pain and stiffness worsened to the point where I called my wife, Kathy, and decided that I should go to the hospital. Sarasota Memorial ER evaluated me and delivered a diagnosis of tendinitis. They also administered a cortisone injection and a diminishing dose pack of prednisone, with directions to follow up with my primary care doctor.

At the time I was 61, an avid weight lifter and cyclist, and was recovering nicely from a total knee replacement which I had eight months ago. My routine had changed to lighter weights and greater distance on the bike. I was used to pain, but I always pushed through it. The next morning, I felt great. So great that I drove to Tampa that evening to ride in a Critical Mass bike ride with Kathy. Nothing was hurting, as I did not yet understand cortisone or prednisone.

I continued with the prednisone until one morning shortly after the dose pack ended, I started to feel my body seize up and spasm. I remember calling my wife and telling her that I didn’t feel so good. I started to describe what was going on, and she said I should hang up and call 911. I sat on the edge of the bed thinking for a few minutes before dialing 911. I made my way to the front door to unlock it. That is where they found me with my Jack Russell Terrier, Harley, sitting right beside me.

I could not talk due to the pain in my jaw and neck, and my muscles contracted to the point where I was forced into a fetal position and could not unclench my hands. When the paramedics heard jaw, shoulder, and chest pain, they looked at the heart as that would make sense, but at the hospital they did not look at anything else.

The Realisation of Its Severity

During the three days when I was hospitalized, the morphine and cortisone helped to make me feel better. However, I still didn’t know what was wrong with me. I was told to see a rheumatologist, the sooner the better. I made an appointment with Dr. Yoel Drucker at the Sarasota Arthritis Center. During my first appointment, I began to quickly realize that this was serious. Dr. Drucker spent close to 50 minutes with me and then brought in other doctors to consult with; I was there for a total of four hours.

That was followed by months of weekly appointments, tests, CAT and bone scans, as well as MRIs. It also began a period of high doses of prednisone and methotrexate, which brought relief. But the side effects caused pancreatitis and extreme weight loss, due to the nausea and vomiting which went on for two years.

I must pause here to mention that without research scientists, the Arthritis National Research Fund, and all the donors who contributed, this is where my treatment would have ended. Those drugs and treatment were the gold standard of that time.

Trying All Sorts of Meds for RA

Rheumatoid Arthritis is lonely. I lost my job and friends, along with all sense of who I was. I slid into two years of isolation and depression. A lot of what I did was mechanical, but Dr. Drucker just kept working with me patiently, and quietly fought against health insurance step therapy.

To date, I have tried various disease modifying anti-rheumatic drugs (DMARDs), along with numerous biologics. Each has provided some hope, but in the end they were not a good fit for my Arthritis. I have started a new therapy in the last eight weeks that looks promising; it is a DMARD, specifically a Janus kinase (JAK) inhibitor.

Fighting the Good Fight for Others and for Myself

Social media has been a good fit for me. I am part of a wonderful and caring community that collectively has more information on rare diseases than the National Institute of Health. It has helped me to begin ending to a different story; I am focusing on what I can do, and doing it when I can. I still enjoy running, biking, swimming, lifting or just being active, and I take every advantage to push the limits. And while it all sounds neat, remember that this is a street fight. Rheumatoid Arthritis keeps taking pieces of me occasionally, but I always take something back.

I have RA, I have it by the belt buckle, and now I race to spread awareness. One in four Americans has Arthritis; I am racing because some infants began their lives with Arthritis. I race for science and the Arthritis National Research Fund. I race for me because I’m scared that if I stop, I’ll stop.

*Note: This guest post is Ray’s personal experience living and coping with his illness, and is not to be substituted for medical advice. Please consult your own doctor before changing or adding new treatment protocols.

Read More: 3 Types of Chronic Pain that Sound Bearable, but are Not 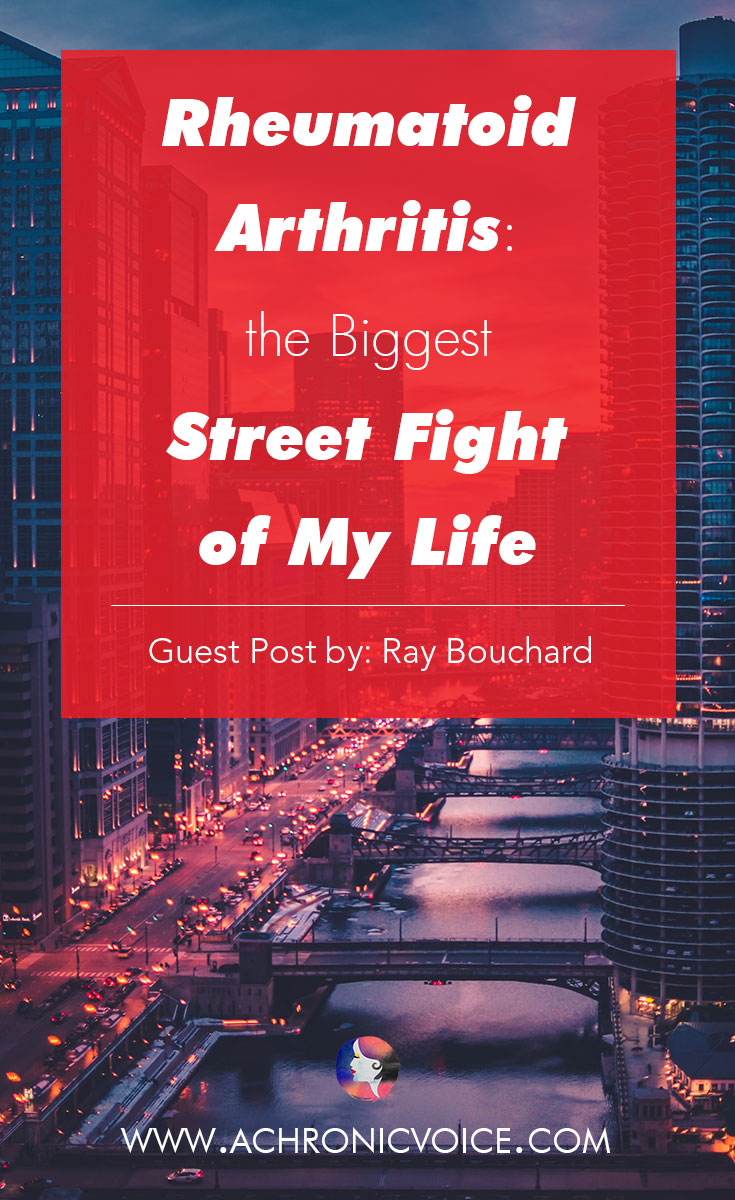 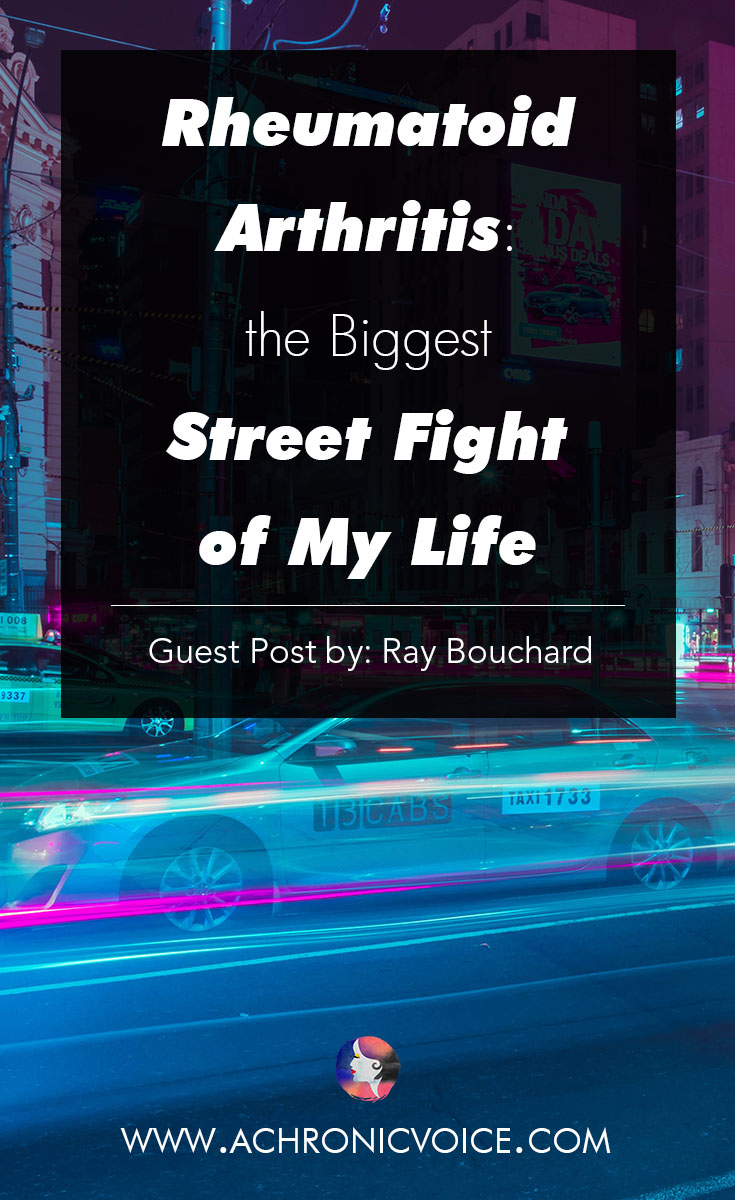 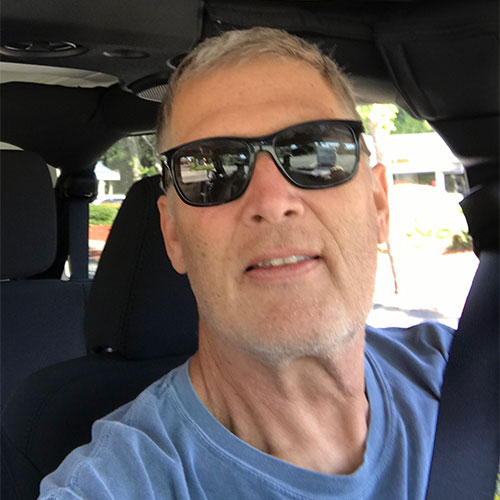 My name is Ray and this is my story; It’s about coming to grips with the life changing events in my life, the first of which was the death of my mother at three months old, which shaped every aspect of my life. I struggle with Post Traumatic Stress Disorder, Anxiety and Clinical Depression. In 2015 I was diagnosed with Rheumatoid Arthritis and found Twitter. A lot of this is about finding a new strength within me to deal with this new challenge, and sharing it with others in the autoimmune community. Connect with Ray on: Twitter.

Issue #273: Migraines Can Manifest Silently Without Pain & The Stigma of What Chronic Illness Should Look Like (aka You Can’t Appear ‘Fine’)

Issue #124: Strange Migraine Cure Suggestions from People Who Don’t Live with It Daily & You’re Allowed to Enjoy Your Life Despite Disability or Illness 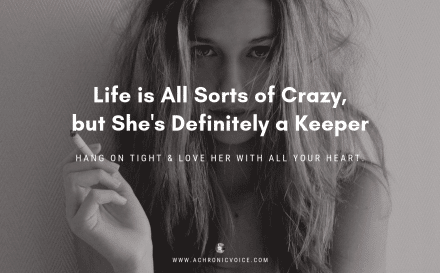 Life is All Sorts of Crazy, but She’s Definitely a Keeper