A Note from A Chronic Voice: I was happy when Tim of Sober Nation approached me and wanted to write a guest post. I’m unfamiliar with addiction as a disease, and knew that he was the right person to share about this issue. We often don’t realise that we’re addicted until it’s too late. We also tend to think of addiction in the form of hard drugs or illegal items, but it can come in many forms. As Tim mentions, alcohol can be the bigger struggle just because it’s easier to obtain. Anyone can be affected, not just those who have suffered from neglect or abuse. This is especially heartbreaking when loved ones watch how it destroys you and your life. Let’s hear Tim’s story, and also how and why he chooses to stay sober.

The Struggle is Real

Before I found myself in this place, there were so many things I didn’t understand about this disease – and yes, it is a disease. I was miserable and struggling to survive each day as an addict. Little did I know that my greatest battle was still ahead.

At this point, you may want to hear that I had a childhood filled with neglect and abuse. You may want to hear that I was nothing like you. In truth, I had a rather uneventful childhood filled with love. My parents were good people who wanted the best for my sister and me. My biggest complaint was that I didn’t see my dad enough because he was always working.

The Vague Road to Addiction

My family life didn’t drive me to addiction. It’s hard to say what did, really. If I had to pick one thing, I’d say it was social anxiety. I smoked pot for the first time when I was 12, and got arrested at 15. I was busted for underaged drinking at a Weezer concert, but it didn’t faze me in the least.

It was at the court-mandated rehab that I realized the root of my problem: I was self-medicating. Those meetings terrified me. I needed to be high just to get through the social interaction, introduce myself, and talk about why I was there. In front of an entire room of people? Yeah, no thanks. Instead of seeking help for my problem, I figured that I could use drugs to get through all my social situations. Addiction wasn’t my intent, I just wanted to get through that next meeting, class, party, etc.

Time marched on and I tried every drug you can imagine. I enjoyed all of them but when I tried opiates, I felt like I was home. The sense of euphoria you get from them is like nothing else, and it didn’t take long before I was addicted. Opiates consume you quickly, and I changed from an experimental kid to an addict. I had a disease that completely consumed me.

How I Become Aware that I Needed to Overcome Addiction

I was lying in bed with my eyes glued open, waiting for 5 a.m. when I could meet my dealer for another fix. My heart was dying, and sleep was no longer an option for me. You’d think that that was my rock bottom if you saw me back then, but it wasn’t. I received a call later that day about my mom that almost sobered me straight up. Almost. Seemingly out of nowhere, she got the news that she had a fatal brain disorder. She needed an emergency surgery or she would die. The surgery itself was so risky that it might be what kills her instead.

My entire family and I left Philly for California to be by her side. I was there in body, but I was struggling to get through each moment. Without any drugs, I was having very obvious withdrawal symptoms. It got to a point where I couldn’t handle dealing with them and my family at the same time. I knew that what I was doing was wrong, and hated myself for it.

My dad and uncle confronted me as soon as we got home. Hearing what they had to say truly affected me to my core. After seeing my mom in the state that she was in, and realizing how my circumstances were also dire, I knew that something had to change. The next day, I entered rehab – and a whole new chapter in my life.

After treatment, I moved to a halfway house in Florida, but relapsed after five months when I returned home. There were too many triggers for me there. You’d be surprised at what can trigger an addict. It could be a place, a person or even a smell. Do you remember the story of Pavlov’s dogs? Pavlov discovered that his dogs would salivate at any object or event that they associated with food. This is similar with addicts. Whenever we’re around anything that reminds us of drugs, we start to crave for them. I knew I had to get out of Philly, so I returned to Florida where I continued the greatest battle of my life.

Things that Helped in My Recovery

Over time, I’ve learned a lot of ways to ensure that I don’t relapse and tumble down that slippery slope. One thing that has been the biggest help to me is stability. It was tough at first, remaining in a job that I hated, but it gave me something to stick to that wasn’t killing me. Eventually, I grew to love the routine and the small pleasures that it brought, one of them being the knowledge that each day was a better one, now that I was clean and recovering.

Another thing that really helped me stay clean was the knowledge that my family loves and cares about me. I’ve always known that they love me, but seeing my mother in the hospital and how emotional my father and uncle were about my addictions, really brought the truth home to me. It all seemed to click. Now, I turn to my family instead of drugs or the bottle when things get tough. Having that support system has been crucial to my recovery.

The Freedom I Have Gained from Being Sober

Despite this, I still encounter triggers in Florida. Even though opioids were my ultimate downfall, alcohol is a major trigger for me. Why? Well, it’s much easier to avoid heroin dealers than it is to avoid bartenders. In recovery, I learned how dangerous alcohol can be. It’s definitely more mainstream than heroin or crack, but it’s just as deadly. I didn’t come this far to let alcohol take me down.

Even though I still struggle with triggers, anxiety and stress, I love my sober life. I wake up in my own bed every morning, which is something that didn’t happen often enough in the past. I don’t let fear hold me back. Instead, I enjoy the strength that sobriety has given to me. I am now strong enough to let myself fail and get back up without resorting to drugs. I try to see the beauty in all things, but most importantly, I am finally free.

Tim Stoddart is the co-founder and current president of Sober Nation. Tim is a big believer in the power of thought, positive living, health, and kindness. A recovering addict and admitted adrenaline junky, Tim has found new and healthier ways to fill the void. He gives credit for his “spiritual awakening” to his loving family and reading thought-provoking books. You can find him on: Facebook, Instagram, Youtube & Twitter.

How to Use the Tetris Effect to Invite Positivity Back into Your Life, Despite Chronic Illness

Managing Anxiety and Depression as a Senior 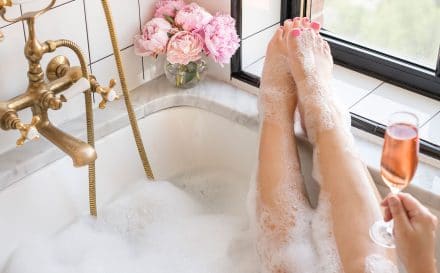 More Than Your Health: How to Start Practicing Gratitude